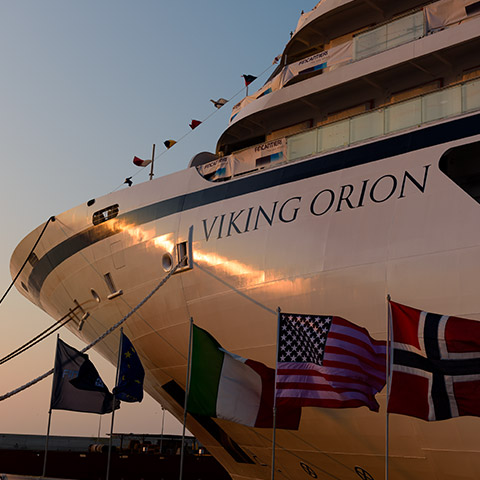 Viking Orion is the fifth cruise ship which Fincantieri has built for Viking Ocean Cruises built at the Ancona shipyard. Viking Orion, as its sister ships, is in the small cruise ship segment.

The ship has been designed by experienced naval architects and engineers, including an interior design team of London-based SMC Design, and Los Angeles-based Rottet Studios: a modern design of Scandinavian inspiration, characterized by sophisticated yet functional elegance. In addition to the all-veranda staterooms, the ship also has spacious suites with sweeping views, two pools, of which one Infinity Pool off the stern, and a Spa designed according to the wellness philosophy of the Scandinavian tradition, with a sauna and a snow grotto.

The Viking ships are all built according to the latest navigation regulations and equipped with the most modern safety systems, including the “Safe return to port”. Furthermore, they feature high-efficiency engines, hydro-dynamically optimized streamlined hull and bow for maximum fuel efficiency and equipment that minimizes exhaust pollution and meets the strictest environmental regulations.

max persons on board

Max persons on board